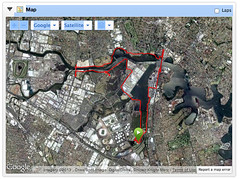 It started as an idea to get the cycling group back into riding once again. That is to join a community organised ride called Ride to See the Lilies. Designed to ease in the others into riding once again. But Ivor though it might be too tamed for everyone, so he volunteered to map out a route for everyone which he called Not So Lilies Ride. I’m not sure if the route is not as tamed as the original route but at least we had the time to ourselves.

You’ll know that I haven’t been riding my bike often when I blog about the ride. I can’t take photos during the ride – so I left my camera at home. Instead, I installed an action camera on my handle bar. The problem with that is that, one must actually sit and edit the video , make it a bit interesting before uploading it. Hopefully – one day I’ll get to do that. For now, showing the Garmin Map should suffice to show the route and some graphs.

In the ride was Ivor, Drew and myself. As the route is a bit fluid, we decided to break it whilst at Newington to visit a Year 12 art exhibit. Then we continued heading into Meadowbank and back to Bicentennial park where we started. There we met up with Trish and Little Tom. We had lunch there before heading back home.