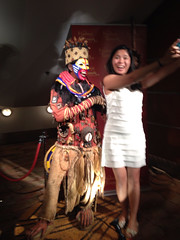 For Mother’s Day last year, Jessica gave her mum four tickets for a February 2014 show of the the Disney’s Lion King playing at the Capitol Theatre. These tickets are great seats – center and just 3 rows away from the stage. We are so close to the stage, we can see the sweat off Simba and the spit when the actors belt out a tune 🙂

One thing with Disney’s production is that you can always count that they are sensational. We have seen this musical when it first played here in Sydney in 1997. The girls were still very young then and in their primary school. Jessica was not able to make it to that show because of school priorities. Back then the girls already have a keen sense of priorities. Choosing to miss a favourite play because of a conflicting school requirement or activity. We ended up giving the ticket to Celine’s classmate Irene – who, because of this experience, had also continued to enjoy going to the theatre as an adult. Years later, Jessica eventually saw the play in one of her travels to New York.

Thus, this is our first time to see the play as a family. Everyone has a favourite. I even started rooting for Scar – the villain of the show with a voice ala Jeremy Irons – the original cartoon Scar. The opening number was always going to be elaborate, well choreograph and they deliver. Rafiki is a very strong Afrikan singer which is a delight every time she comes on the stage. The shadow play and the puppetry are what makes this musical worth seeing again and again. The scene where Mufasa came out as a 3D image in the sky was truly a master work of stage art.

Lion King is that Disney movie that my daughters grew up with. We watched it in the cinema in the 90s, more than once. Had the VHS version when it came out and was watched a lot. Jessica also bought the Diamond Edition BluRay+DVD after watching the play in Broadway. Celine knows all the lyrics of the songs, I’m impressed that she was able to contain herself from singing along for the duration of this play – or did she 😉

« Weekend at Bowral
Getting Back To It »