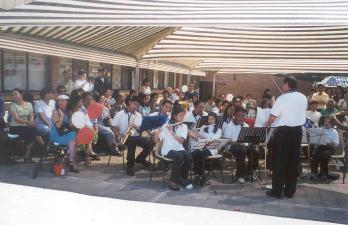 Our band gets invited in multi-cultural activities

So how did our year go? Well, I would say that the centre of this year’s activities was the formation of the HARANA Concert Band. After, the Sydney Olympics, a number of amateur musicians like me, who participated in the Millennium Band of Penrith Valley found ourselves not having a band to go back to. We were experiencing the so called Olympic withdrawal that the whole of Sydney was inundated with. Suddenly all the major activities mellowed down and we were all feeling empty.

I was voted president of Harana and Jeanne the secretary. Our whole family is involved in it either as players and organisers. At first, the band rehearses in our living room (actually 3 families take turn in holding rehearsals at their home) but we were growing steadily. Now we rehearse at a local school every Sunday. We started with mostly Filipino members, thus the name Harana – but now, other nationals have joined. The band is conducted by Merv Lawrence, a very nice and patient person. He must be, he tolerates our playing :-).

Our very first public gig was at the 50th Wedding Celebration of the Salvadors, very loyal friends and strong supporters of the band. We also had a pleasant surprise when we won Third Place at the Penrith Eisteddfod for the Open Band category. A major gig was also when we played at the Joan Sutherland Performing Arts Hall for the Mayoral Concert. Our band gets invited in multi-cultural festivities and in November, we help raised funds for the children of Payatas by playing at a charity drive. Over this Christmas we had 5 engagement for Christmas Carols i.e. basking :-).

Already, we’ve received grants for us to run a number of workshops. We also have a number of Sax players that will now spin off into a Sax Quartet.

Well, anyone thinking of picking up an instrument and learning how to play it? With a little more push, you could get the community along and enjoy some time blowing your horn.

Originally published as part of the Pascual Family News 2001.