The 1st of July 2003 marks the beginning of the end for my Canon AE-1 Program SLR Camera. I bought this camera in Hong Kong in 1985 from my first real job with Unisys (then Burroughs). There was nothing wrong with it, like many, we decided to stop using films in favour of the digital camera. We bought a compact Olympus X200, our first digital camera, and this is the first photo that was ever taken from it. It was shot by Kosh Naidu as he took the camera off my hands as I was inspecting it in my office desk. This camera has one handicap that drives us nuts – it takes too long to charge between shots, owing to it being powered by just two AA battery.

We bought a Fuji FinePix S5000 as a gift for Celine’s senior high graduation and also for our trip in 2004-2005. Have we brought the film camera, we would have just taken 200-500 photos, but with 2 digital cameras instead, we took almost 6,000 photos in this trip. Sadly, the FinePix camera died last Easter. After taking these photos – I left the camera on top of the dog house. Unfortunately, it rained that evening and I didn’t realise where I placed the camera until 3 days later. When I saw it next – it was a goner. 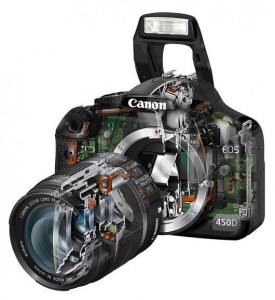 Jessica bought herself a handy Sony DSC-T5 and Celine herself a Sony DSC-W80 compact camera. We have been using these cameras for most of last year. But I have always longed for the flexibility of a DSLR. You want that fine adjustment in the depth-of-field for portrait shots, to force a silhouette shot, or to bounce off that harsh flash. Besides, knowing how to use an SLR and not employing that knowledge is like knowing how to play the saxophone and not playing it – but, that’s another story.

It should come as no surprise that I choose Canon. Primarily because the trusty Canon AE-1 Program SLR is like an old friend. I have nothing against Nikon, Olympus, Minolta or Pentax – I just want to stick to the brand I know. This decision of course has immediately narrowed down my choice to their entry level DSLR – the Canon EOS 1000D and the Canon EOS 450D. Although the 1000D is newer, it is actually a stripped version of the Canon 450D (or you could say an improved version of the superseded Canon EOS 400D).

Here is a shortlist of the camera that I’m considering:

So should I be the practical hobbyist getting only the minimum I need to get good photos – or should I go for a bit more whiz bang gadgets with a wow factor that I probably rarely get to use?

Jeanne seem to think that I should get the EOS 450D to get that extra flexibility. But what really are these extra features that is worth the $200 difference. Based on technical comparisons:

Other features too like “Proximity Sensor” – the LCD turns off if you hold the camera closer to your face to use the viewfinder, is only in the 450D camera. Physically as well, the lack of thumb grip in the 1000D was said to give it a plastic feel. Of course neither of this have a direct effect on the image quality.

As a whole, Canon has introduced the 1000D to have an entry on the market at the sub $1000 mark – but I feel that they have retained a lot of the features of 450D, hence worth the consideration for this camera.

After deciding on the body, I still need to choose between a basic prime lens or a medium grade zoom. The 50mm prime lens I’m considering has been a main stay on Canon since it’s film SLR version. However, DSLR has 1.6x cropping effect which means that a 50mm lens fitted on a DSLR is equivalent to an 80mm lens on a 35mm Film SLR. Up coming Full Frame DSLR do not have this cropping effect, but are still very pricey.

As a rule, anything above 75mm focal length and you ought to be using a tripod or the camera shake will start to be noticeable. Unless of course I get a lens with IS (image stabiliser) … kaching … sound of the cash register asking for more money.

I’ll update this blog as I get closer to a decision.

11 Jan 2009 – Jeanne and I walked in to JB Hi-Fi (Blacktown) and made an offer for a Canon 450D IS Kit and a 50mm f1.8 II lens. Unfortunately, they do not have the IS kit. Nevertheless, they took our order but at this point no commitment has been made.

12 Jan 2009 – JB Hi-Fi (Parramatta) had the 450D IS Kit, but they only had that 1 unit on display. I told them the deal price with their Blacktown branch, and they agreed to cut the price further if I want the display unit. Since we’ve been looking for our SLR we have already slashed over $400 from its original price. I felt that I have already have all the planet align on this one – bought in a store (not the net) but better price than what I could get off the net. The configuration I wanted. So we’ve closed the deal – I’m now a proud owner of a brand new 450D 🙂 Happy Birthday to me!