26-Sep-2010 – It’s been over a year since Art passed away. I kept this post private because I have not written it all. It is written on an email sent by my sister Liberty announcing the passing of her beloved Art. The comments were also collected from the replies to her email and mine. 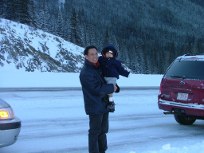 Art was diagnosed of metastatic colon cancer on Dec. 23, 2007. Since then our life had changed. He underwent surgery to remove the cancer in his colon on February of 2008. On April of that year he started his chemotherapy for the tumors that spread to his liver. We went to the cancer center every fortnight for series of treatments over a year and a half.

Every blood-tests, meetings with his oncologist, meetings with the pain doctor, neurologist, CT scans, chemo treatments – I was by his bedside until every treatment is over. We learned that cancer is not about fearing death but about life. It drew us closer and LOVED EACH OTHER MORE. It wasn’t only his battle but mine as well. On May 20, 2009 he suffered internal bleeding, so severe, I needed to call 911 and rushed him to the hospital. I thought I was going to lose him, but he fought on for me. We renewed our vows in the hospital on our 16th year wedding anniversary on May 29, 2009. He was transferred to Rosedale Hospice where he continued to fight. We celebrated his 47th birthday in the hospice on June 23, 2009. I have seen first hand how hard he fought.

On July 19, 2009 I can’t bear to see him suffer any longer, he have had enough, he is at the end of his life. I hugged and whispered to him what was in my heart. I told him that I will be okay, that JB, Louie and Jim will be okay. That he will be okay too. That God is going to embrace him in His arms. That he will be in a better place. I never expected that after having said those, he drew his last breath while in my arms. God is really so good, He gave me all the time to tell what I needed to tell him in the last hour of his life.

Art is now in the hands of the Lord- July 19,2009 at 1:20 in the afternoon at Rosedale Hospice Calgary, Alberta Canada.

This is the email I wrote to break the news to everyone in the family.

When Liberty, my youngest sister, called us in Dec 2007, that Art (husband) was just diagnosed with colon cancer, I can sense that their family had resolved to face the problem and fight. They are a beautiful family. JB and Louie, though very young has taken into their shoulders responsibilities and care not even imposed on our young adults today. Jim, their youngest, may not fully appreciate what his older siblings and mother is going thru but they all went for the biggest challenge they have ever faced. These boys remained calm, collected and focused to their studies – getting the academic rewards that Art and Levs are truly proud of. They were a joy to the people and relatives who came and visit to give a family support to their fight.

Today, Art had finished the fight – a brave soul who has given everything to live one more precious day on this magnificent life. It is a sad day and with heavy heart we mourn his passing. He left a legacy, a strength of character seen in the eyes of Liberty, JB (15), Louie(12) and Jim(6).

May he rest in peace.