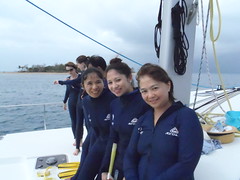 Low Isle, Port Douglas. All suited up for a dive.

It’s the most wonderful time of the year. Even more wonderful is spending it with the family on a holiday. This year we decided to visit Port Douglas – about 60km from Cairns, or 2,800km from home – 28.5 hours to drive or 2 1/2 hours by air and an hour drive from Cairns Airport. Celine and Jessica were in charge of all activities whilst in this holiday.

Our first stop is to have lunch at Voodooz – a New Orleans style Cajun Chicken restaurant. Jessica wanted to visit this because Hamish and Andy raved about it more than what their ad would require. The owner was particularly engaging and had looked after us the moment we step in the restaurant. They were not quite open yet when we arrived but nevertheless made us felt welcome. A great start to the holiday.

Our next stop was our accommodation at the Oaks Lagoon. It was an apartment with its own small plunge pool. As we’re tired from the journey – Jeanne and myself used it whilst Jessica and Celine took a brief nap. Later, the 3 of us went to Coles to get some provisions – leaving Jessica at the plunge pool where she entertained herself taking photos with her underwater camera.

Dinner was at the nearby resort called Ramada. The restaurant is next to a pool. I ordered a Long Island Ice Tea. Jeanne thought it was really a tea – that she ordered the same. We all had a laugh when she took her first sip and declared ‘There’s alcohol on this tea!’. Jessica replied – ‘Mum, there’s not even a tea on a long island ice tea – it’s 5 types of alcohol. I thought you were just being adventurous.’

The next day was a big treat from the girls – one worthy of a tick off the bucket list. We were picked up by a bus at 7:45am by Sailaway to sail to the Low Isle. After about an hour of sailing – we were supplied with sting suits, snorkel gears and flippers. After some briefing on our responsibilities around the corals (not to mention hefty fines if we step on it), we were taken on a glass bottom boat to the beach where we had a brief introduction to snorkelling. I am very unsure at this point as I seem to want to stand up and fix my gear every few minutes – something I will not be able to do once we swim to the deep end. But, with help from Courtney Love (well Love is not really her last name but Alex the skipper calls her that) – I was snorkelling and experiencing the Great Barrier Reef – the best and largest coral reef in the world. Snorkelling at the Great Barrier Reef – Queensland is now a tick off my bucket list!

Jessica and Celine were more adept to snorkelling while I was tagging on a safety line to Courtney. But I eventually went venturing on my own – well not quite – I kept close to Celine and Jessica. When we had enough – Celine and Jessica swam back to the main boat whilst we waited for the glass bottom boat to take us back.

On the recommendation of the lady coach driver of Sailaway, we had our dinner at a restaurant called Salsa at the CBD. It was a great seafood restaurant. After dinner we wondered around town. Port Douglas strikes me as a very trusty town. The novelty shop that was still open at 9:00pm just had one staff and the goods that were displayed outside the shop could be easily shop lifted but obviously no one is doing that. The locals are friendly – you would expect that from a tourist town. The Sailaway crew – Jacky, Alex, Courtney, the coach driver, and the staff at Oak Lagoons – there is something genuinely friendly about them.

The next day is the day before Christmas. We caught the train from the Freshwater Rail Station to Kuranda. This is a 100 year old rail track no longer used for normal commute but as a tourist attraction. It goes through tunnels and bridges that were built mostly by human labour using pick, shovel and axes. An engineering marvel that still stands proudly today. We spend the day around Kuranda, visiting the different markets and a Butterfly farm. Then we took a 7.5 km SkyRail trip back to Caravonica. From there a bus took us back to Freshwater.

The Cairns SkyRail is one of the longest cable system and goes over a world heritage rain forrest. It also boast a magnificent view of the Barron Falls.

Mindful of the difficulty of securing a table for Christmas eve, we called ahead and was able to get an early table at the Sea Temple Resort. The restaurant is grand next to an even grander pool. After dinner – we headed back to our apartment but we were all knackered – it was 11:00pm so we all decided it was already Christmas Day (after all – it is 12:00 midnight in Sydney being at DST).

On Christmas morning we had a bit of exchange gifts before preparing for a BBQ Lunch. The Atienzas were also at Cairns and we invited them over to Port Douglas. After lunch, we all went to the better pool in Ramada instead of using the pool at Oaks Lagoon. There’s a swim up bar and a lot more people enjoying the holiday around the pool in Ramada. Later that day – we continued the festivities on our own small plunge pool – just to get the full value of our rent 🙂

The next day, Boxing Day, we flew back to Sydney – but not before we could try the breakfast buffet at the Ramada. We were entitled for a discounted breakfast being guest at Oaks, but so far we’ve missed all other day to take advantage of it.