Let’s call it a belated Valentine celebration, after all we originally booked it on a weekend right after the 14th but we were unable to secure our accommodation and had to move it a week later. We visited places we’ve been, like the Sabor and Twine, as well as those that we’ve missed before like the Emerson’s and Cracked Pepper.

Every time we visit the Hunter Valley, we learn a little bit about wine. On this visit, I’m now a converted Semillion and Shiraz drinker as long as it comes from this Valley. The soil, the climate and the local expertise makes these wines their flagship. I’m also enjoying wine tasting a lot more. I do not claim to be an expert – not by a long shot – but I seem to now understand my personal preference. I promised my daughters not to buy wine on this trip ‘cuz our tiny cellar is full, but it’s impossible to walk through fire without getting burned. I managed to get 4 dessert wine from Emma’s Cottage, a dessert wine from Piggs Peake, Apple Ciders and Sangiovese from Oakvale. I guess you can consider that just a scald. 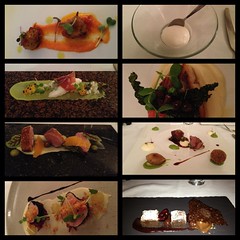 Jeanne and I came down for the weekend to have a food trip. We’ve booked this quite a while back and didn’t expect to be heading into a stormy weekend. Forecast was 110 mm of rain which is a lot of water. The storm, may also have allowed us to get a great table at the Emerson’s who would otherwise be extremely busy on a Friday night. We had the eight course degustation dinner with me opting for the matching wines. We had a proper and friendly sommelier who gave us good introductions of the wines as it was served. It didn’t make it taste any better but the experience made it more special for Jeanne and myself. The best combination was duck with a matching Pinot Noir – two of my favourites.

The next morning was a bit fluid, we wanted to attend a wine making tour – one was fully booked and the other was cancelled due to the weather. Instead, we decided to start the day with a brunch at the Cracked Pepper. The rainy weather has once again played a good hand – for a while, we were the only customer. We were given the best table and a lot more attention. Being a food trip, I choose the breakfast with a matching Sparkling Wine (no one is allowed to call it Champagne anymore – unless the wine actually comes from Champagne, France). 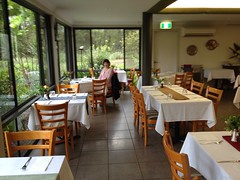 Our next stop was the Wine Theatre, it’s just a 15 minute video of a brief history of the valley and some more information on wine making. After the show – I received a call from Choong – he got my email about my proposal to trek Nepal together – but I digressed. After the show and the long Skype call with Choong in New York – we were back tasting more wine.

We then headed to First Creek – a commercial bottler of wine who conducts regular factory tour. This time we weren’t very lucky. The tour was cancelled because they were taking delivery of grapes. There’s lot of activity on the floor that visitors get in the way,a safety issue. They let us took some photos from the top of the factory though.

Jeanne then decided that we should visit a cheese factory at Mt. View. It was around 22 km from where we were. Since we had nothing better to do – we went for a drive. We reached a winding road and rain has been pouring mad. After driving 20 km we realize the next 2 km was on a dirt road, a hill climb and looks very muddy. Not gonna happen just so we can have cheese, we turned around and headed back to Pokolbin. We visited the Tower Cellar, and had a sticky beak at the Robert’s Restaurant where they were preparing for a wedding.

At this stage it’s almost 3pm, we decided to have a light lunch at the nearby Oishi in Tempus Two complex. This area is quite popular to tourist and we’ve been here several times already in the past. We lingered on for a while at Smelly Cheese before heading back to the hotel and lazily watched TV.

At 8 pm we thought we’d grab some dinner at the hotel’s restaurant, but as I’m about to park – Jeanne suggested that we try the new restaurant called ‘Boy O Boy’ at Tempus Two. We sat in and we’re given the menu – nothing more than pizzas and finger foods. We politely exited and was thinking of heading back to the hotel again. Then we noticed that we were not at ‘Boy O Boy’ at all – the restaurant is a tiny shop between where we were and Oishi. Nevertheless, they were booked out. Back in the car, we changed our mind about heading back and took our chances and drove another 8km to Twine.

I almost regretted the trip. Roads in the country are often deserted and the recent rain had flooded some parts of the road. There were warnings on the TV earlier not to drive through flooded roads and I would have heeded it – if I can see them. Luckily, they were not so deep but still disconcerting because you’ll only know the flooded part of the road when you’re on them already.

The food at Twine was worth the trip. We tried their signature oyster entree. Jeanne said she’ll only taste 1 because she does not like oysters. She ended up taking 2 of the 6 – it was that special. Every shell is done differently with one taken out of its shell and placed on a small glass to soak on a tomato based sauce. For our mains, we shared a serving of mud crab like the last time we were in this restaurant. We tried to use spoon and fork for a while but in the end we were using our hands and getting soak in its thick sauce. You will never serve this crab on a state dinner – we look very undignified eating it but it is soooo good. This time I had this meal with a Semillion but since I can only order a glass, my choices were limited to what the house was prepared to open. 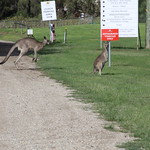 Kangaroos at the Oakvale Cellars

Sunday – Jeanne planned that we have lunch at Mt. View but we were warned that we will pass through the same rough road. We dropped that plan and decided to head home instead. We use the remaining value of our hotel voucher to have breakfast before driving off. As we pulled out the driveway – we decided to detour and pick up some Apple Ciders at Oakvale. It’s a beautiful day, the sun is shining, a stark contrast to the previous rainy days we had. As we entered the vineyards of Oakvale, we noticed wild Kangaroos were out and about – I stopped the car at the middle of the long driveway to take photos.

We must have been very early, the cellar is not yet open and the main building is being renovated. Someone noticed us milling about and he introduced himself to us as Greg, the winemaker. He is very friendly and very conversant. As it turned out – he comes from a long line of winemakers who comes to Australia during harvest season to help out in the wine making. He didn’t have keys to the makeshift cellar but he kept us company until the ladies arrived to open it. He owns a vineyard in California – www.lafollettewines.com and invited us to check him out if we’re ever in the area. 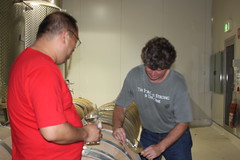 Meanwhile – he showed us inside the factory -it was impressive, very clean and all machineries looks very modern and new – they were. He let us taste wine from the stainless wine tanks as he describes the finer qualities of these new equipment. It was fascinating and my jaw dropped when he invited us to taste their reserve stock direct from the oak barrels. The first one we tasted was from a first use oak which would generally have the strongest oak flavour. The wine was really raw and I swear the taste and aroma of that wine stayed in my palette long after we left the place. The second one was from a 4th time use oak barrel – ageing the same batch of fruits. You can really tell the difference in flavour between the 2 barrels. The experience is something Jeanne and I would cherish. When their shop finally opened, Jeanne and I went and taste a few more wine like any other customer – but I just can’t get over the chance experience we had.

I thanked Greg for showing us around and this is what he said – “I come from a long line of wine makers, my children and their children will perhaps continue the tradition. It is my pleasure to share my work to people who appreciate wine and allowed us to continue doing what we love most.” This chance short insight in wine making has made our weekend and would be telling it with fondness for time to come.