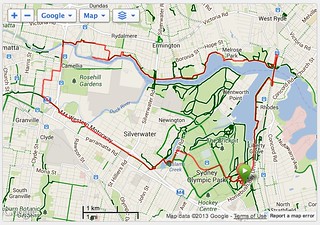 First Day of Winter Ride Route. Auntie Rose would have been proud to see the old cycling group.

Great turn up for a ride considering it’s the first day of winter. Jeannie, Felix, Ivor, Drew and myself met up at the usual site at Bicentennial Park. It’s a beautiful day though heavy clouds were forming. The cycle ways around this area is improving every year and there are a few more construction activities we’ve seen. Where there are swamps, cycleway bridges have been built.

We took the scenic route to Parramatta which I captured in my AEE Action Camera but as usual – I watched the footage – though they are great – I dread the day I sit down and edit it. Drew also brought along his new toy – a Magellan eXplorist 510 GPS. It looks like a great piece of toy for bush walking, fishing, cycling and just all around travel. He also showed me a bit of geocaching. 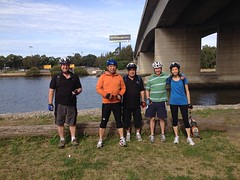 Drew, Rommel, Felix, Ivor, and Jeannie. Photo taken by another group of cyclist under the Silverwater bridge.

Jeannie was a bit out of practice but after she stopped and had a bit of muesli bar – she was ok again for the rest of the ride. Felix did great as well, he look flustered when we said we’re going back to Homebush via the same way but I’m sure he could have easily done it.

On our way back – I discovered where the Fujitsu building was in Homebush. It is right next to the Thales building – imagine that. If only Jeanne and I worked in these buildings of our employer it would have been very handy. I knew Jessica and Celine will not believe me if I tell them that these 2 companies are right next to each other here in Sydney – so I took a photo 🙂 (inside joke).