This week has not been particularly pleasant for me. For years we’ve been able to tolerate the screaming high pitch noise generated by both of our showers. Most of the time it does not bother us because we all have to wake up early anyway and this morning ritual almost act like a wake up call as soon as the first person in the house hits the shower. On days when Celine do not wish to be awaken – she fixed this little problem with a $2 ear plug. I don’t know how effective is that against the high pitch noise which seems to be getting worst all the time but we have had it. Last week, Celine booked a plumber and this is when these showers are to be silenced.

How much would it cost to replace 4 taps – $200 or maybe $300 tops? It actually cost double that and my friends told me I struct a bargain. Nevertheless, it’s an unplanned expense and like most households – it hurts but needs to be done. I was contemplating about getting a new toy for my new interest – bush walking. A handheld GPS (Garmin GPSMAPS 62s), but after incurring this, it will have to be on the back burner for a while. 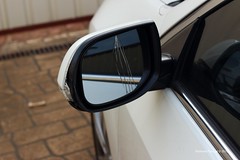 There is only one rule in driving. Don’t hit anything.

Being on-call for work is a challenge. You never know if the next call can tie you up for hours with the bosses breathing down your neck. But it’s what keep you in your toes and forces you to think off your feet. Not to mention – it’s like the second job that Jeanne wants me to have. Working from home on a job I already know how to do. I took a weekend stint of being on-call. It’s a long weekend and it’s not a popular time to be on call. I didn’t like it too but having that extra income this weekend, I might just be able to buy that GPS without guilt.

Then it happened, as I was parking my car at home when the passenger side mirror decided to pick a fight with the gate post and it came out second best. It’s also the more expensive side mirror of the two, the one that tilts when the gear is in reverse. I like my car, I feel good when I drive it – so now I have this gnawing feeling in my guts that the poor thing is hurt and need to be fixed very soon. Perhaps I should just forget that bloody GPS for good! 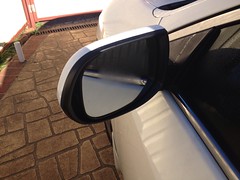 Exactly a week after it happened – it is once again back to its beautiful self. When they say that the sum of all parts of the car is more expensive than the car itself – I didn’t realise how true it is. This side mirror when replaced in full will cost over $1000. Luckily, Honda has provided sub-parts for its assembly. The electronics inside the mirror was retained but even just replacing the casing itself still set me back over $500. Luckily still for me – it was covered by my lease and I didn’t have any out-of-pocket expense – sort off.