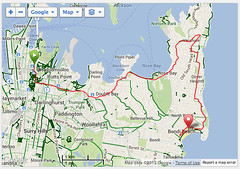 The City to Surf Route

Another year, another City-to-Surf. We’re told that this is the largest organised fun-run in the world with an estimated 85,000 participants. I should know – I’m number 88348 and possibly also in the high 80,000 finisher. As in previous years, Jeanne and I clock this walking the 14 km route in a whopping under 3 hours. 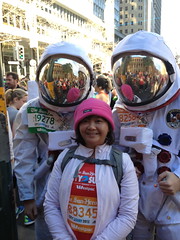 Back of the Pack with NASA

We’re there to soak the atmosphere, to enjoy the fun in the run. On route, Jeanne was taking photos of people in costume and t-shirt signs. Celine, who is more of a serious runner have completed the race just as we were crossing the starting line. She waited for us at the finish line with Jeremy who volunteered for the St. John’s Ambulance for the event.

After lunch, Jeanne and I walked another 5 km looking around for that pastry shop in Bondi that Jeanne love. Jeremy and Celine headed to the end of the bus queue that will take the runners to the Bondi Junction train station. After we found the pastry shop and bought some – we walked back to the bus queue but was lucky enough to hail a regular bus instead of the event bus. When we got to Bondi Junction, Celine message me that they were still just boarding their bus back in Bondi.

« Homebush to Arncliffe
Litany of Mistakes »