About a week ago, I received a letter from Louise, the daughter-in-law of Mona. She told us of the news that Mona had an accident that resulted in some bone fractures. She was taken to the hospital and has been moved to a nursing home. 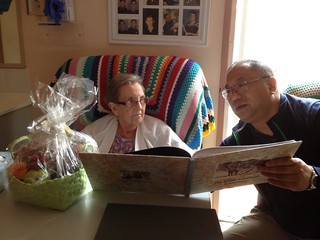 She is always in our mind, the thought of visiting her comes briefly and cast off as quickly as it comes, postponed until a perceived better time. Once again, days turned into years and my promise to kept in-touch remains just that – a promise. I am very much touched that Louise considered to send me this news about Mona, amongst her all other friends. Before days will turn into weeks again, I called to say we’re coming for a visit. It was Greg (Mona’s son) who answered. Surprisingly, he recognised my voice. This is very astute of him since the last time I called was in 2007.

This weekend, Jeanne and I went up to Wyong to visit Mona. We could tell she’s being well look after at the nursing home. There were at least 5 offers of help from the nursing staff when they saw us standing by the door waiting for Mona. Understandably, she did not recognise me at first, but when I introduced myself, there was a smile on her face.

We chatted a bit. I followed a protocol I learned from my volunteering – i.e. not to talk about her ailment. She has that to worry about all day when no one is around. We talked about my children, her grandchildren and great grandchildren. We also showed her our South American photobook. This allowed me to talk a lot and her to just listen and give short responses. This way, I hope, kept her relaxed.

I can tell however, that she’s in pain but bravely keeping cool so that we stay a bit longer. She asked for a painkiller for her back. I took the opportunity to get the nurse aside and asked if it was alright for us to stay longer. The nurse replied: “Visitors are always welcome. The presence of visitors is far better than any alternative. She will tell you when she had enough.”

And so we did, we stayed until Mona said – “I’d like to rest now”. I promised I would come back again soon. In my mind – I wish I could keep this promise, to drop in for a minute or two to say – “Hey – how are you?” and rattle along about my kids and hope that the encounter brings a moment of normality in her day. The sad thing is – the hour drive each way is enough to turn days into weeks and weeks into months and before you know it, years will pass once again.