Our second Spring Cycle as a family. At the 15KM finish line in Pyrmont.

Everything was prepared the night before. Two bikes were disassembled and secured in the boot. Another 2 bikes on the rack. Tyres were pump at recommended pressures, helmets and gloves are all in the car. Last year, there was a hiccup on Celine’s brakes, that is why a few weeks ago I had the 3 older bikes fully serviced. Two bikes were fitted with new brake pads. Celine’s gear cables were also replaced.

We drove to the starting line, parking in Pacific Highway between St Leonards and Wollstonecraft. I assembled the two bikes but Celine’s back wheels had a dragging brake. It was quite severe and I started to panic when I can’t fixed it. Celine walk and rode her crippled bike to the starting line where there was a mechanic. Like last year, the line at the mechanic was quite long. But this time I figured out how to fix the problem. 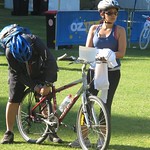 We were given a 5 minute warning to get started or risk having the route closed on us. This didn’t help – I became more edgy and was desperately trying not to ruin the day for the family by being snappy. Eventually I got the bike fixed. We went on our way and I felt much better.

The route is generally the same as last year – more importantly – it is the only day of the year that bikes can ride across the Sydney Harbour Bridge. We were expecting to stop and admire the view at Mrs. Macquarie’s chair but for some reason – Jeanne who was ahead did not stop. The three of us did and spent a bit of time looking for Jeanne in the crowd before we realised she has moved on and was waiting for us just outside the park. The rest of the route went without further glitch except that Jessica said she saw a boy and a woman almost ran over or hit by a bus on the hairy portion of the route just after the Entertainment Centre. 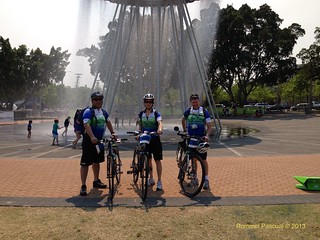 When we reached the 15KM City Ride Finish Line in Pyrmont we parted ways. The girls headed to the Meriton Apartments in George Street where their Tita Helen is currently a guest. As for me, I was to catch up with Ivor and Jeannie towards the 50KM finish line but I have no idea where they were. When I left Pyrmont, it felt like I was the last person still riding the event. Until I stopped at a traffic lights where a few more cyclist caught up. I kept on riding stopping briefly at one of the major stop to tinkle but otherwise kept pressing on. Every time I caught up with a group of cyclist – I looked around for Ivor or Jeannie. When I got to the finish line – it dawned on me to check my phone and there it was, messages from Ivor and Jeannie. Based on these messages, I figured that they were actually about 30 to 45 minutes behind me.

That’s when I felt hungry. My breakfast consisted of some yoghurt with strawberries and a cup of coffee. That plus a big dinner the night before was all my fuel for this 55Km ride. I went to lunch whilst waiting for them.

For the rest of the afternoon, we visited the Bike and Lifestyle Show at the Dome – we had free entry on account that we were Cycle Sydney participants. My day, however, was far from over. I took the train back to St. Leonards – cycled to my car and picked up the girls at the Meriton Apartments. Jessica was to stay with her Tita Helen in this apartment but decided that she needed to attend a birthday party and came home with us. We also needed to be home early because we were using Celine’s car who needed it to go to Lithgow that night. However, while driving home, Jeremy called Celine and asked her to check if it was safe to drive to Lithgow. The massive fire since Wednesday was still burning. Sure enough she was advised not to travel as the place was declared as a disaster area.

After dropping off the bikes at home, Jessica went to her party and we drove back another 22 km to Parramatta to have dinner. When we were driving back home – Celine decided to join Jessica to go back to the Meriton Apartments in the city at around 10pm. Not wanting them to be on the train to the city in such a late hour, Jeanne and I decided to drive them back to the city. It was almost midnight when Jeanne and I finally got back home and dropped our weary body in bed.