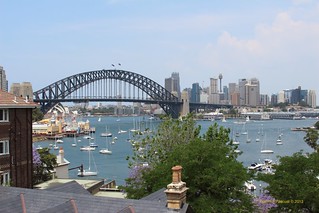 The most iconic bridge to cross in this event. The Sydney Harbour Bridge – affectionately called as the coat hanger. Next to the Sydney Opera House, it is the most photograph icon of Australia

The first Seven Bridges Walk I did was in 2007. Jeanne and I completed that one but towards the end, our passports were no longer stamped. The official walk had finished but we kept going. Signs and directions were being put down as we were completing our walk but we persevered. The next day, Jeanne and I could not get off the bed and had to call in sick as we recovered. At our age, we have no idea what 25 km of walking can do to our body. Specially if you haven’t trained for it . We were at the City-To-Surf in August that year and we were OK walking the 14Km without prior training. We thought 25KM would be the same – we were so wrong.

The following couple of years, we only did the Hunters Hill to the Sydney Harbour Bridge (about 15 km) and bailed out from there. It was an easier walk, leaving one with some more energy to look around The Rocks before heading home by train. 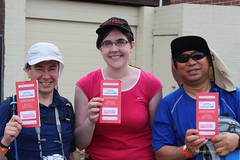 This year however, I was determined to complete this course and hopefully still be able to go to work the next day. Ivor, Elizabeth and I powered on to complete the Seven Bridges Walk within the designated event time. Starting just after 9:00am in Drummoyne and crossing the Iron Cove Bridge completing all passport stamps before 4:30pm. Towards the last 5 KM, Elizabeth and I were speed walking to make sure that we get the last 2 stamps in Rozelle Village and the Iron Cove Bridge. We were so pleased because like me – it is also the first time for Ivor and Elizabeth to collect all the stamps for this walk since we started walking it in 2007.