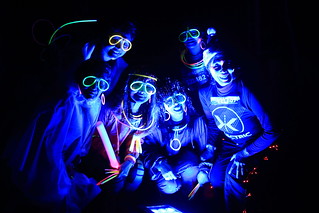 We’ve been very lucky with big events in Sydney so far. From the Colour Run in February to the recent Sydney-to-Gong, the weather has been perfect. Today, that luck ran out. It rained for most of the duration of the Electric Run – a 5 Km run around the Homebush Olympic Centre which started at 8:30pm. Most participants were wearing the event black shirt, some brought their own fluorescent costumes but everyone had something blinking or lighted.

The rain did not deter nor dampen the spirit of participants. Perhaps if was the cold breeze that motivated everyone to dance to the beat and kept warm as we awaited for the start. If the organisers were to be believed, these were the accolades they have given this run:

Jeanne and her amigas made a day out of it. They booked rooms at the Novotel – right at the heart of the Electric Run activities. And spent the night there after the event. Celine also joined them but choose to run the course instead of soaking the atmosphere. Which was probably the better option than getting more wet from the rain. She even managed to finish the run. Jeanne and her amigas bailed out when they were right next to their hotel about 3.9 km into the course.

I took photos of the event and since I was not wearing anything blinking – I got mistaken as the event photographer. I was asked several times to take photos of what would be random people to me. People on these events also don’t mind being photograph when asked. After dark – it became difficult to take anymore good photos and with the rain – I kept my camera under wraps.