We had a mini string of luck on this year’s Melbourne Cup. In the office, I was watching out for the social club to buy some sweeps but I missed the designated time when they were selling it. Nevertheless, I called the reception to see if there was some left and sure enough there was. I bought the last 3 tickets at $2 each. I didn’t even bother looking at the horses names, to me they are all the same – I have no knowledge on the betting odds for the day. 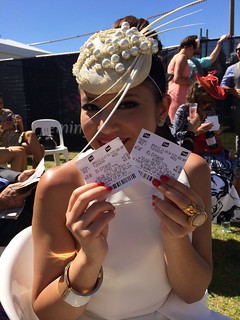 Winner: Fiorente to Win and to Place

Come 3:00pm, all the punters huddle at the lunch room where some nibbles were served as we watched the race. I was not cheering for anyone – I didn’t know what my horses were. When the race is over, I looked towards the wall and saw that they posted our sweep bets. To my surprise – I won. My $6 won $27.50 – not bad. I immediately texted Jeanne and the girls to announce it. Just as I hit send – a message arrived from a visibly jubilant Jessica who had placed a tab bet on Fiorente to win and to place. She said she won more than $75 – more about Jessica later.

Shortly after, a less jubilant but nevertheless amused Celine declared that her $4 tab bet on Fiorente won. This is her first time to put a bet on a TAB ever. Then Jeanne replied to our texts, she also won in their office sweep albeit just on the third placing horse. What are the odds on that?

Later in the week, our office was raffling parking spaces for our new building. Our current offices where we occupy 5 storeys, housing thousand of employees, will be moving to a new office space next year. The problem, however, because of its prime location – there are limited parking spaces. To be precise, only 80 are available. It was a major concern for me as public transport will be 2 hours each way at its best. For the first year however, my parking is secured as I won a space. It will be raffled again on the following year.

And now for Jessica. This year, she watched the Melbourne Cup in style. She and Vanessa flew down to Melbourne, stayed in a hotel, hired a make up artists and had glamorous frocks specially for the day. They both went at the Flemington Racecourse to watch it live. Had champagne and joined in the glamour and spectacle of the race. Now that’s the way to do it.

After the Melbourne Cup Day, Jessica and Vanessa hired a car and did the Great Ocean Road drive. The trip can take some 6 hours along a very scenic view. It can just be a foot note to say they have taken this trip but they did something special by filming it on their iPad Mini. They marked the placement of the iPad in the car so that it is always in the same position when they replace it. Here is a result of this film after they had edited it. I hope you enjoy it, we certainly did. 🙂