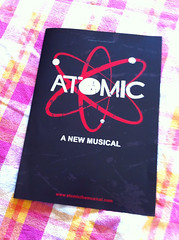 If we are not careful, we would be the first specie who would wipe ourselves out of existence. The invention of the atomic bomb ended the second world war – though it can be argued that it could have ended without it anyway. Germany has already surrendered and Japan was about to. But Washington had to teach Japan a lesson and they want the surrender to be unconditional. They also want to shock the world with what an atomic bomb can do. What better way to discourage anyone from starting a war than a threat of total annihilation.

In the history of mankind – every time a more powerful weapon is discovered – the inventor justify its creation by believing it can prevent future wars. The carnage so great , why would there be a need to actually use it – again. Perhaps – the atomic bomb did just that – since its invention over 50 years ago – it has never been used again. The idea of one nation like Germany, in both world wars, would rise as an open aggressor is unthinkable at this time. Terrorism is the new world threat but it is clandestine and without a border to define it.

The musical deals with the moral conflict within the man or “men and women” involved in the Manhattan Project. The group of physicist who finally cracked the actual splitting of atoms that causes a chain reaction and releases such force we now all know about. Ultimately, their skill and labour would have been responsible for killing thousands of innocent Japanese in Hiroshima and Nagasaki. They also face the prospect of being responsible for a lot more deaths in the future.

Who is to say that in the next thousand years – some rabid dictator gets his hand on a nuclear bomb and drops it just to see the world burn. The technology is here, we can no longer unlearn what we know. That is the frightening reality of our future.

This musical has dealt with the subject matter in a dramatic and sometimes comedic way. As all scientist – it starts with an idea that excites them and buoyed by the prospect of gaining a Nobel prize. Then the realisation that if they do not build the bomb – the enemy (in this case Germany) might build it first and use it. The play is done by 7 actors, each playing multiple parts and accents. The songs are witty and acted with such precision I have enjoyed every minute of it. If you get a chance, the play is at the NIDA Playhouse in Kensington (NSW) near the UNSW until the 30th of November 2013. Alternatively – visit their site www.atomicthemusical.com.

Special thanks to Dinar and his wife (violinist) who gave us the tickets for the night. Too bad Celine and Jessica were unable to come and watch it with us – they would have loved it too.