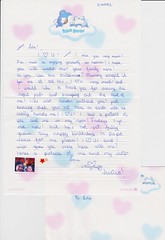 Letter written by a 10-year old Jessica to her Lola Lou on Christmas 1999. Her Lola got her angel wings on October that same year.

Our Christmas celebration of 2013 lasted for 10 days, being in a cruise and all, there was nothing else to do but to enjoy the time together. We decided however to have a subdued New Year celebration. Where we would have gone to see the Sydney fireworks just like on previous years, we stayed home instead and watched Titanic 🙂 Funny, because that’s exactly what we all wanted to watch when we got back from our ocean liner voyage.

Titanic was also the last movie I remember watching in the cinema with my mum together with my whole family.

Anyway, back to that pleasant discovery. Bored from just watching, Jessica decided to tidy up her room. It must have been quite an extensive cleaning as she re-discovered a letter.

It is a letter written by her 10-year old self dated 16-December-1999. Not knowing how to mail it, she kept it all these years. It was not read by anyone nor known to anyone but her until today. The letter was addressed to “Lola” – i.e. her Lola Lou, my mum, who passed away earlier that same year on October.

She now has given the letter to me for safe keeping and to be added to her Lola Lou’s family tree entry.