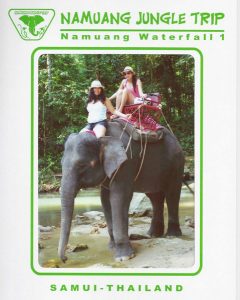 Celine dropped her tsinelas when she climbed and the elephant picked it up and handed it over to her. How cool is that?

After a crazy start to their holiday, Jessica and Celine is back from a week long R&R in Samui, Thailand. They missed their flight on the way over after mis-reading their itinerary. They thought they were leaving at 9:00am on a Sunday but instead they should have left at 7:00pm that Saturday. Oh well, they were able to rebook their flight and left on the following Monday night.

Thanks to facetime and free wifi, they would call us around 7 pm in Thailand, which is around 11 pm here in Sydney. They would show us around the resort and we see them having dinner. But sometimes, the wifi is too bad that they could just send iMessages across.

The news of Air Australia going into voluntary receivership leaving thousands of passengers stranded, some of them in Thailand also cause me some concern, as I know these girls would not hesitate to fly on budget airlines. It was lucky that Air Australia do not fly out of Sydney. They were actually travelling with Singapore Airlines – boasting that they were on the new A380 on the way back.

« Life, Wedding and a Wake
The Dinner Club »