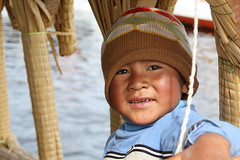 Taken at Lake Titicaca, this boy is a member of the Uros Island inhabitants who went on a Totoro Boat ride with us

These series of blogs were written whilst Jeanne and I were touring South America with 18 other friends. Although all of these were written a day or two after the events – I haven’t been publishing them and had “on purpose” 😉 left posting it in my blog after we’ve returned home to Australia. This is not an attempt to document the travel itinerary but rather to capture the stories on how I remember this trip. The names of our fellow travellers have not been used except for their first names as a courtesy for this is a public blog. I have also chosen pictures with limited images of our fellow travellers except that of Jeanne and myself.

Most of these were written at 4:00 in the morning. One lady in our trip, we affectionately called Auntie, will also be awake at this time doing some exercises – she turned 79 sometime during the trip. She does her exercises, I write my blog – sometimes oblivious of the presence of each other.

I made no attempt to research the places we went to prior to the trip. I have approached this in the same manner as watching a movie I am excited about. I will see neither trailer nor reviews and experience it as it unfolds on the screen. Except this time – I experienced South America with as little prejudice let alone information. To be honest – I have not heard of Machupicchu prior to this trip and only started noticing some ads or mentions of it after we’ve decided to go to this trip.

Like most Filipinos who studied in the Philippines – we had an introduction to the Spanish language – but this has very little help on this trip. We passed our Spanish classes by memorizing phrases and conjugations – it was never practiced in conversations. What helped however was that a lot of Filipino words from our various dialects are Spanish. These and the context of the situation had helped in communication when interpreters are not around. A lot of South Americans also studied English – thus in most cases a little English on their part and a little Spanish on our part makes some interesting conversations and greater height of accomplishment when you actually got messages across each other.

Over all – the trip is very enjoyable. We were often asked – why South America? Now I can say – why not? I’ve heard about the drug trade and how dangerous the cities may be. But it is no different from riding a bike down the street – sure there are risks – but the satisfaction of experiencing the travel overwhelms the chances of your vacation being turned into a movie or a news item. To see a soccer match at Stadium Rio in Brazil and the wonders of Iguazu Falls and Macchupicchu are certainly overwhelming.

These blogs are dedicated to Jeanne, Celine and Jessica – they will be the one to endure the stories I would be telling for years to come. Then they would say – “yes dear/dad – I’ve read that in your blog“.

To read the blog in chronological order – you may wish to start at the blog entitled The South American Adventure Begins then follow the forward links.

Categorised in: Feature Story, From The Past