Three weeks in a row of participating in a major Sydney event. I decided to sign-up for the Sydney-to-Gong right after finishing the Seven Bridges Walk last week. I promised myself that if I was feeling good after the walk that I would go to this 90km cycling event.

The riding bib arrived on the last Thursday before the event. I was given bib no 8665. The ride was limited to just 10,000 riders with preference given to those who fund raise for MS. If the quota of riders were not reached, regular registrants can get in. 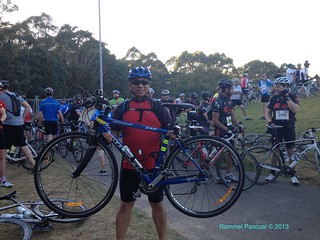 Just arrived at the Sydney Park, 6:34 AM feeling fresh and full of energy. Powered by 4 pandesal with longanisa and pushed in by coffee.

My ride starts at 7:15am. With this many riders, the start is regulated to avoid congestion. We ride at the road and traffic rules applies to bikes, we get no special treatment. Unlike the Spring Cycle two weeks ago, the Sydney-to-Gong is joined by more experienced riders. On my usual rides, I use shy-boy shorts. These are normal looking shorts but with bicycle padding inside. But for this Sydney-To-Gong – I have joined the MAMIL , used my SPD Bike Shoes with cleats and wore a non-descript jersey.

The ride was going smoothly until we reached the Royal National Park. The downhill section of this ride is quite dangerous. Once, when the event occurred on a rainy day, there were so many mishaps in this section that the event was aborted to prevent further accidents. Today, a young girl just about a hundred meters from me, crashed at 35km/hr. A few of us stopped and helped. I made myself useful by directing traffic away from her as she lie in the ground while we’re not certain if she broke any bone (later read in the news that she’s 1 of the 3 causalties of the day and broke a shoulder bone). There was a motorcycle marshall who drove off to get an ambulance stationed on a major stop ahead. A bushfire brigade pickup truck arrived first and they took over the care until the ambulance arrived. That’s when I also continued with my ride. 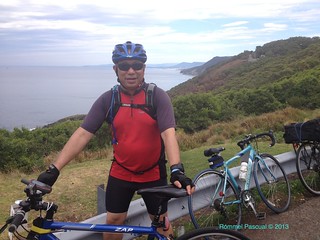 First 55km out of the way, 35km more to go. Still smiling but at the back of my mind – the challenging hills are yet to come

What worried me on this ride were the hills coming out of the national park and several difficult ones right after. On previous years, I used a mountain bike with granny gears. These are unusually large cog in your gear set that makes the toughest hills doable. If you can walk up, you can stay on a bike set at the granny gears. This year however, I’m using a hybrid road bike with no such set of gears to bail me out. To my pleasant surprise, I climbed those hills on my second gear (not even on the first). After doing these hills, my confidence soared high that I was looking forward for more. On some, I climbed them on my third gear – it was awesome. It felt as if I was very strong doing these where others were walking it.

The forecast was that the temperature was to rise to 30C, but so far we had cool breeze all morning. About 25km into the finish line, however, it was getting balmy. After a beer at the end, a sausage sizzle and had a quick look around – I followed the crowd to the train station – feeling good about myself completing another Sydney-to-Gong event.