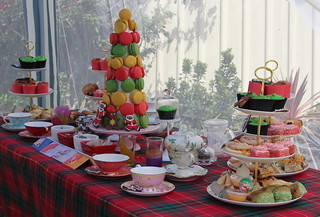 On the first day of Christmas, Jeanne hosted a party for the families of the former Harana Concert Band and friends. Surprisingly, a number of the former band members – not just their parents came. Three geneartions of the Marquez and Rupac families came. Our house has played host to the Rupac babies and the laughter of children has once again graced our home.

Jeanne has put her heart on this, assisted of course by her two sous-chef Celine and Jessica. They started baking about a week before the party and decorated every individual pastry. You can also say that much of what they prepared has been tried troughout the year. I often balk at the prices of desserts in coffee shops. Macaroons costing as much a $3 a piece. But, with the amount of preparation put into cooking it at home, it is no surprise it costs so much.

The night before the party – Jeanne and the girls stayed up ’til 2 in the morning, cooking and cleaning up.It wasn’t just the amount of food prepared but the pride and the love for cooking that makes the task seemingly enjoyable. I was put in-charge of taking photos. Though I am glad that food blogger Angie brought her camera and took beautiful photos of the food while I took photos of the guests. It was a well attended party of the Harana and friends. One that we would once again filed in the many get-together of these lifelong friends.